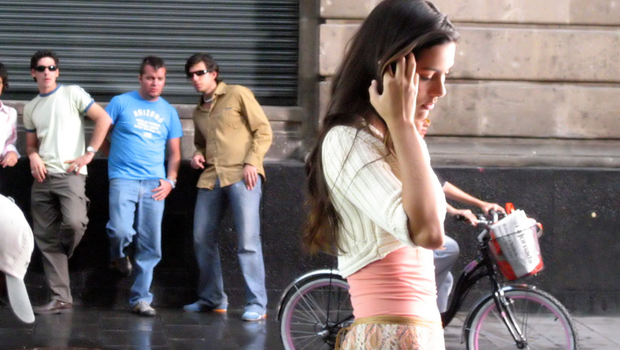 This is the third in our series of First Man Standing bible studies. Over the series we are exploring from the Bible themes of masculinity, relationships; including those with friends, our partner and children, and how we can change our society to challenge violence against women.

Today we look at how men relate to women. This will be followed up with studies on how we relate specifically to our wives and children and how we can work to end violence against women in all its forms.

Purpose of the study

To discuss how men relate to women and to understand how we have created a culture in which women are often treated as objects or second-class citizens. To understand how the Bible expects men to behave and how Jesus provides an example for us. We will be looking at issues of gender equality, pornography and youth culture. This also forms a background for an introduction to First Man Standing.

What does it feel like to be a woman?

As a preparation for this study take a look at the Everyday Sexism website (http://everydaysexism.com) to get a sense of what it feels like to be a woman. What is your reaction to the stories that you read there?

Divide into pairs. Think of one old tradition and one modern tradition that makes you realise that gender is an issue in our society.

Is there anything you would change in the marriage ceremony?

We will explore in this study:

What the Bible says about the value men and women

How we objectify women and what needs to change

How Jesus provides a model for us to follow

1. Men and women are of equal value in the sight of God

Women have been battling for equality for may centuries. In many societies they have made substantial progress. What about in the church? What is our understanding about what the bible teaches about the worth of men and women?

There is neither… male nor female, for you are all one in Christ Jesus (Galatians 3:28)

God created man in his own image, in the image of God he created him; male and female he created them. God blessed them. (Genesis 1:27-28)

The New Testament gives us great examples of women who travelled with Jesus, women in ministry and women who played key roles in the church. Since then, the Church has had a shameful history of denigrating women. This is the generation in which God calls on us to repent and change.

David’s sins of rape, adultery and murder started with objectifying and lusting after a beautiful woman.We as men need to guard our eyes and our thoughts. It also warns us about the abuse of power. Bathsheba had no choice in the matter. King David had all of the power and Bathsheba none in this context. She could not refuse the King. David abused his power in the most awful and life destroying way.

Finally, the passage suggest that David was neglecting what he should have been doing as king, which opened the door to temptation.

In the spring,at the time when kings go off to war, David sent Joabout with the king’s men and the whole Israelite army.They destroyed the Ammonites and besieged Rabbah.But David remained in Jerusalem. One evening David got up from his bed and walked around on the roofof the palace. From the roof he sawa woman bathing. The woman was very beautiful,and David sent someone to find out about her. The man said, “She is Bathsheba, the daughter of Eliamand the wife of Uriahthe Hittite.”Then David sent messengers to get her.She came to him, and he sleptwith her.

We may not have committed murder or adultery, but all of us as men struggle with lust and pornography. Jesus could not have put it more strongly:

Anyone who looks at a women lustfully, has already committed adultery with her in his heart (Matthew 5:28)

It is hard to engage with the seriousness of Jesus’ comments in a world where we are constantly surrounded by sexualised images. This is a particular challenge for younger men where access to sexualised images is unlimited and social norms have shifted in many countries towards much greater promiscuity. What actions can we take? Job said:

“I made a covenant with my eyesnot to look lustfully at a young woman”.

Bu this is not just a question of men’s holiness and temptation; it is a question of women’s dignity and value. It is hard for men to imagine what it is like to be a woman subject to male looks and abuse. The Christian community needs to be radically different.

3. Jesus modelled how we should relate to women

Jesus gave us some amazing examples of how to relate to women:

He treated women with respect

He crossed social boundaries to speak to them (John 4)

He protected women from violence by other men (John 8)

He appointed women as the first witnesses of the resurrection (Matthew 28:1-10)

Have a look at the following passage

As Jesus and his disciples were on their way, he came to a village where a woman named Marthaopened her home to him.She had a sister called Mary, who sat at the Lord’s feetlistening to what he said.But Martha was distracted by all the preparations that had to be made. She came to him and asked, “Lord, don’t you carethat my sister has left me to do the work by myself? Tell her to help me!”“Martha, Martha,”the Lord answered,“you are worriedand upset about many things,but few things are needed—or indeed only one. Mary has chosen what is better, and it will not be taken away from her. (Luke 10:38-42)

Jesus treated Martha and Mary as his friends. He encouraged Mary to be his disciple (“to sit at his feet”). The passage about the death of Lazarus states that Jesus loved these two women (John 11:5). Do you have good friends who are women?

How much can we anticipate the kingdom?

What would that mean?

Eph 5:1-5 Live a life of love … not even a hint of sexual immorality

Captured by a Better Vision – Tim Chester (on pornography)

25 Tough Questions about Women and the Church – J Lee Grady