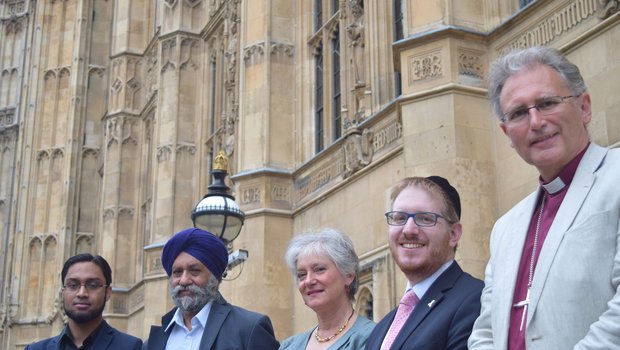 Christian, Muslim, Sikh, Jewish and Hindu leaders met at the House of Lords last night, 15 July, to pledge to make a stand against domestic abuse.

The event was organised by Restored, which campaigns to end violence against women.

Speaking at the reception, Baroness Scotland said: ‘Domestic violence affects one in three women in the world. If there were a disease causing such an impact there would be an outcry’.

Shahin Ashraf of the Muslim women’s network, said: ‘There are two women killed and 10-12 honour killings each year in the UK. Honour-based violence affects 11,000 women. It is considered something that a woman does, that brings dishonour on her family, that hurts the pride and wounds the egos of men, but she suffers death threats, harassment, acid attacks and forced abortions. I believe we need to prepare our communities for zero tolerance to domestic violence.’

Alastair Redfern, Bishop of Derby said: ‘We’ve got a big task in getting faith to recognise domestic violence when we see it, and work out how to handle it. We often don’t have the skill to give a woman the opportunity to speak about it. We need to learn to read the subtle signs of when a person is hurting, and how to deal with their issues when they do want to reveal what’s been happening.’

Peter Grant, co-director of Restored said: ‘This gathering has shown me that domestic violence is an issue shared by all our faiths. In discussion with others here it’s apparent that issues around conservative male leadership, misinterpretation of sacred texts, and cultures that tolerate abuse are very much common ground.

‘But we should not be here. It is an outrage that domestic abuse remains such a widespread epidemic in the UK, and we need to acknowledge that faith communities have been slow to address these issues. It is now vital that we take action and demonstrate courage and leadership.

In support of the declaration, other faith leaders have given the following statements:

Abdullah Hasan, Chief Imam at Holborn Mosque, says: ‘There are a number of misconceptions regarding domestic abuse and religion in our society. It is the duty of religious teachers to provide clarity and guidance on this issue as well as repel any incorrect beliefs and perceptions people may have about this growing problem.’

Celia Capstick of the National Board of Catholic Women says: ‘The Catholic Church has been addressing domestic abuse and violence for sometime now and is aware that it is a major problem for all faith communities including its own. A Recent survey by the Bishops' Conference Domestic Abuse Working Group (DAWG) showed many parish clergy felt ill equipped to respond appropriately to victims of violence. Work is being planned to train marriage counsellors in domestic abuse response, for seminaries to include it in priests' training, and to raise awareness that Canon Law now prioritises the safety of the victims.’

Jasvir Singh, Chair of City Sikhs says: ‘Domestic abuse affects men and women of all faiths and backgrounds, and its impact can be felt across the generations. An estimated 1.4m women and 700,000 men were victims of abuse last year according to the ONS.

‘There is much that faith institutions can do to challenge such behaviour and break that cycle of abuse. This declaration is a good first step in acknowledging that the problem exists and that all people of faith have an active role to play in changing society for the better.’

Christopher Cocksworth, Bishop of Coventry, says: "Violence against women is a shocking reality that has pervaded most human cultures. Whether by ‘turning a blind eye’ or subliminal religious pressure to ‘turn the other cheek’ where Jesus would have confronted an evil, violence against women has been too often unchallenged by the churches. In the name of Christ, who repeatedly defended the dignity of women, every Christian is mandated to speak out against any form of aggression towards women and girls wherever it is found."

Rabbi Benjy Rickman, Head of Jewish Studies at King David High School Manchester said: ‘Jewish tradition is very clear: it is forbidden for one person to harm another. The Talmud states that it is forbidden to even raise a hand against another. Jewish law prohibits humiliating or belittling another person through word and deed. We are obligated to prevent a person from getting hurt. Faith leaders must remind society that we are all created in the “Image of God”, we are all worthy of love, respect and dignity. By signing the charter we commit ourselves to action to rid society of this terrible plague.’