New to First Man Standing? If violence against women is to end we need men to help challenge the beliefs, attitudes and behaviours that perpetuate it - in themselves, and in other men. We're a community of men looking to bring change.

Find out more
Back to fms blog

Allow me to introduce myself, my name is Gareth Thompson, or Gaz, and earlier this year I became an Ambassador for First Man Standing with Restored. I’m probably more well known for my alter ego, Gareth Angel, one of the UK’s very few Christian pro wrestlers.

Firstly, I would like to thank Bekah and the team for their trust and encouragement so far and I am so excited to be involved in a campaign that I deeply believe in.

Secondly, I would like to thank every single one of you who have already signed up to be involved. We've had a positive response over the last month and we are planning to relaunch the campaign ‘officially’ later this year - watch this space!

I was driven to explore First Man Standing again during the storm of media coverage that followed Sarah Everard's disappearance and murder. I found myself engaging in a wide range of discussions on the issue, with both men and women, some positive and healthy, others downright shocking. I felt that I needed to do something, and I took action. I spoke out. I wanted to learn about the issues women face, day to day and to change what I could to help. It was eye opening in some ways, but I knew deep down, the issue had always been there.

I was reminded of a recent scandal that shook the pro wrestling world in June of 2020. A former girlfriend of a well-known wrestler accused her ex-partner of sexual assault. This caught fire on social media and, inspired by her strength, many other female wrestlers and fans alike shared their experiences of sexual assault, harassment and even rape.

Almost overnight there were wrestlers implicated from all over the UK and abroad, from the small companies running shows in working men’s clubs, to the global juggernauts like WWE. The more stories were shared, the more people started having discussions about what should be done. Companies began to distance themselves from the talents involved. Some were stripped of championships, others fired. Some were suspended while the police carried out investigations. Many companies felt they had to issue statements and impose stricter safeguarding policies. It touched every corner of the wrestling scene. 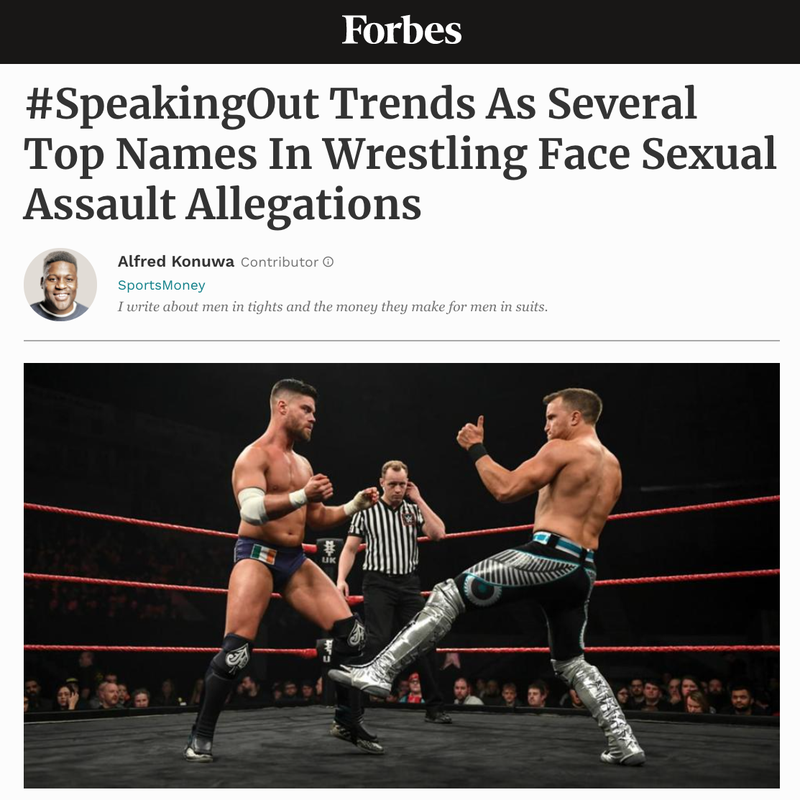 Within weeks this movement, dubbed the Speaking Out movement, had hit national press, it was even discussed within parliament. A group was formed to bring change to the wrestling industry.

Things seemed to just fade away. As quick as it came, it went. The world had moved on. Sound familiar?

There are several parallels here with the Sarah Everard story:

Then nothing.The world moved on.

The thing that concerns me with the Speaking Out movement, is that now the initial buzz is over and we are returning to shows, training and performing in front of fans again, it appears as though all the effort made when the story first broke has now fizzled out. Some of the men tried to return to the scene. A lot of the people who were vocal when the issue was being covered, have now gone quiet.The world has moved on.

There is still a way to go. Still a lot of ground to cover and changes that need to be made for the future and the safety of the generations of female pro wrestlers and fans yet to come.

My prayer is that the same doesn’t happen with the issue of male violence towards women. I feel confident that we have an amazing opportunity to continue the conversation, continue to raise our voices and take action, continue to be the First Man Standing. The challenge for us going forward will be keeping this at the forefront of our minds, keeping this at the heart of our churches, our men’s groups, our workplaces. To be consistent, persistent and determined. Determined to bang this drum until real change becomes reality and not drop the ball when the next news story breaks.

We are just getting started and we need you to join your voice with ours. We plan to equip, empower and release you to be able to defend, speak out and step up when you encounter male violence towards women, harassment and inappropriate behaviour.

Will you join us?