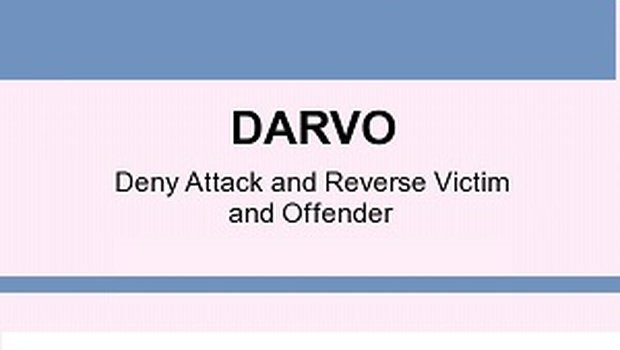 Abuse that is visible, as horrific as it is, is just the tip of the iceberg. As domestic abuse/violence is becoming more widely understood, there is recognition that a significant amount of abuse is not visible but no less impactful on the victim. And that physical abuse is not isolated from other types of abuse that is unseen.

Currently the news is full of examples of these "unseen" types of abuse; sexual abuse and harassment that sometimes had been widely known about, but many just turned a blind eye and the women involved felt powerless. When perpetrators are finally accused, there is often a very typical pattern of response that has been identified and outlined by Jennifer Freyd from the University of Oregon who has completed research on strategies that an abuser may take when confronted about their abusive behaviour. She has provided a memorable acronym to describe it - DARVO. 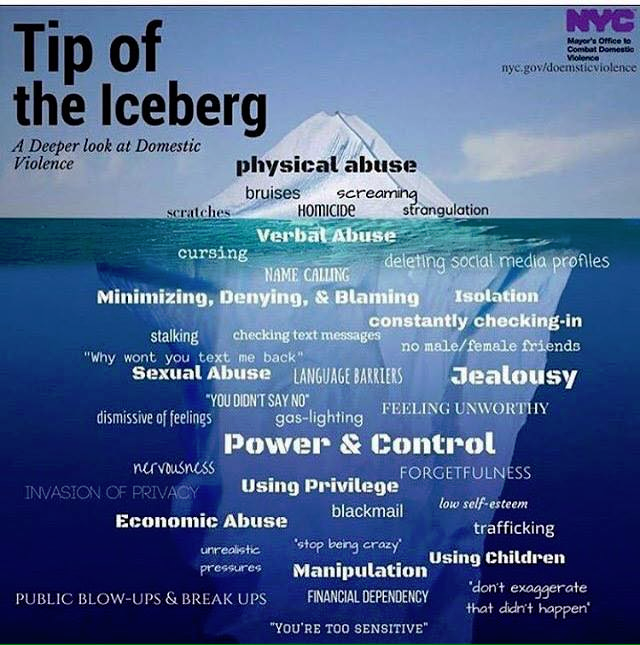 DARVO refers to a reaction perpetrators of wrong doing may display in response to being held accountable for their behavior. DARVO stands for "Deny, Attack, and Reverse Victim and Offender." The perpetrator or offender may Deny the behaviour, Attack the individual doing the confronting, and Reverse the roles of Victim and Offender such that the perpetrator assumes the victim role and turns the true victim into an alleged offender. This occurs, for instance, when an actually guilty perpetrator assumes the role of "falsely accused" and attacks the accuser's credibility or even blames the accuser of being the perpetrator of a false accusation.

There are two common types of denial that an abuser (or even an observer) can take:

Put together they can take the form: "It didn't happen, but if it did, it wasn't that bad" or "It rarely happens, but when it does it isn't harmful."

When explaining attack behaviour, Freyd outlines in a 1997 paper how DARVO responses may be effective for perpetrators. "I have observed that actual abusers threaten, bully and make a nightmare for anyone who holds them accountable or asks them to change their abusive behaviour. This attack, intended to chill and terrify, typically includes threats of law suits, overt and covert attacks on the whistle-blower's credibility, and so on..... "

Regarding Reverse order of Victim and Offender Freyd writes:

"[T]he offender rapidly creates the impression that the abuser is the wronged one, while the victim or concerned observer is the offender. Figure and ground are completely reversed... The offender is on the offence and the person attempting to hold the offender accountable is put on the defence."

"By denying, attacking and reversing perpetrators into victims, reality gets even more confusing and unspeakable for the real victim. .... These perpetrator reactions increase the need for betrayal blindness. If the victim does speak out and gets this level of attack, she quickly gets the idea that silence is safer."

This is the silence that an abuser wants - it enables him to keep his reputation, roles and friendships intact while potentially continuing with the abuse unchallenged. It also serves to confuse onlookers - family, friends and church leaders/members, and couple counsellors (that is one of the reasons why couple counselling is not recommended in the case of abuse). Onlookers become confused and do not know what to believe and therefore choose to remain neutral or uninvolved; again another result that the abuser is hoping to achieve.

One other response that abusers are currently taking, repeatedly, in the news is to ‘seek treatment’. This is a distraction strategy, hoping that people will think their behaviour is due to a ‘sickness’ rather than abusive choices. The aim is to diminish their accountability by putting on a misplaced veneer of contrition for their ‘sickness’ rather than accept responsibility for their actual conscious and premeditated abusive behaviour.

So what can you do? Well start by educating yourself. Find out more here about what abuse is and what it looks like.

As always, you can give regularly to Restored to enable us to continue to work with survivors, train churches, and produce free resources.