Next time you ask ‘why doesn’t she leave?’ - remember this picture. 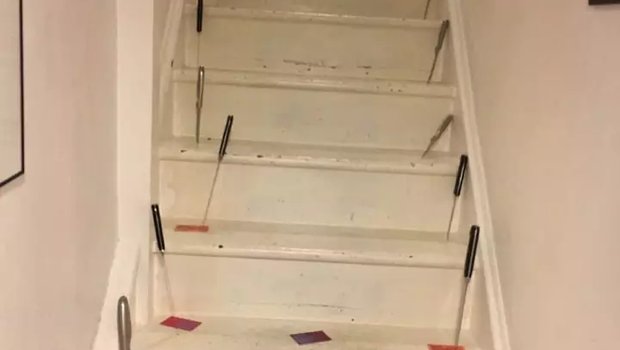 Polly Neate, former Chief Executive of Women’s Aid wrote an article in iNews which included this image taken by a police officer on a domestic abuse call in London and shared on Twitter by the Metropolitan Police.

This photo is shocking - knives are on each step on either side of a staircase, which provides us with a startling visual education as to why it is so hard for women to leave an abusive relationship.

Neate explains, ‘this picture shows clearly the very real threat to life that escaping domestic abuse represents. The knives symbolise that threat: “If you try to leave, I will hurt you. If you try and flee down these stairs, I will stab you.” ‘

Not all survivors of domestic abuse have something so visually threatening in their everyday lives, nevertheless the threats and barriers to leaving, that do hang over them, are just as real.

As Polly Neate, says - Next time you ask ‘why she doesn’t leave?’ - remember this picture.

(Image: Inspector Rowlands of the Met Police tweeted this picture with the caption: ‘A few weeks back a colleague of mine went to a domestic assault & found this when he entered. Male arrested & charged. Life saved’)