Well it is clearly your fault, you left the door open!

This was my reaction, when someone told me that they had been burgled because they had forgotten to lock the door. My reaction was not unusual at the time and even the victim of the robbery agreed; they should have locked the door.

See? That was victim blaming! I was so used to blaming the victim of a crime, rather than the person who committed it. I grew up in a city where armed robbery, phone theft or general violence were a common occurrence. When it happened, we invariably looked for reasons why it had in relation to the victim - so much so than we even have a term for this in Colombia: “Dar papaya”, or in its unorthodox translation, “Papaya given”, which means to present the opportunity for something bad to happen.

This unhelpful attitude has translated to any type of crime, including sexual crimes, and it’s sadly not just a Colombian attitude, but a general one in Latin-American society. The appalling mass rape of a 16 year old girl in Rio hit the headlines of the main media outlets this week (a few days after the video had been shared on social media). The responses to the news were, sadly but not surprisingly, very poor as summarised by the Brazilian cartoon below. 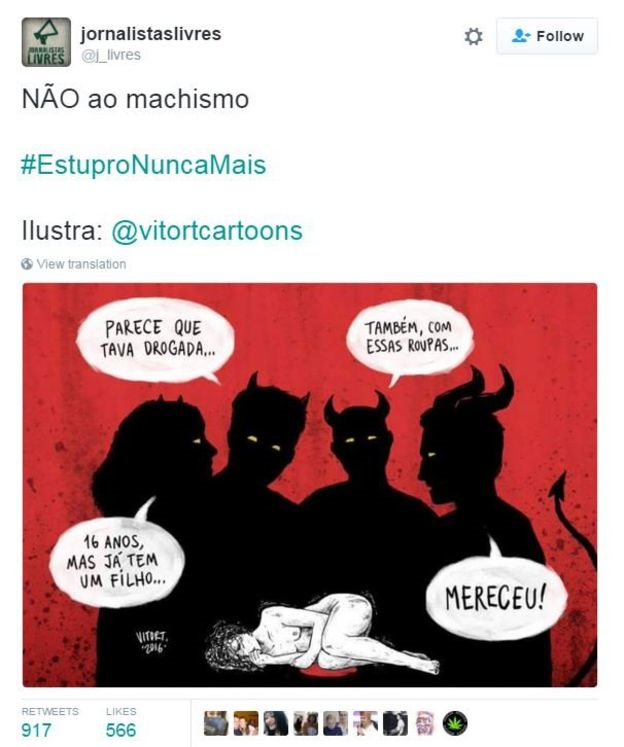 "Apparently she was on drugs".

"But look at her clothes…",

The teenage girl victim of this crime even mentioned to a local newspaper that at first she didn’t report it as she thought she was going to be “badly judged”.

Why do we even think of putting responsibility of any type on a teenage girl who was raped by 19 men?

Are we trying to detach ourselves from the horror of the situation? Maybe, but what we are really doing is excusing a behaviour that is destroying the integrity of another human being, and by doing so, preventing the perpetrators from being held accountable. When we don’t make a stand and denounce what is wrong, we are taking the side of the one who has committed evil, preventing justice for the victim and the chance for the perpetrators to confront the reality of their acts and repent.

Victim blaming is cowardly behaviour which prevent us from engaging with the person at the point of their vulnerability. It is not easy to engage, to be empathetic, and it opens our own vulnerabilities, exposing our fears and shortcomings.

As a result of this, we do not confront what lies at the centre of the issue of rape, and at the centre of any other form of violence against women: the use of power (whether physical, emotional, circumstantial etc.) to exercise control over the body of another human being. In this instance, the power to demonstrate “I am man enough to do it too”.

Two weeks ago we were with a group of Brazilian men and women discussing issues of gender and gender-based violence. One of the discussions was about what it means to be a man in Brazil these days. Men expressed the difficulties they face when they don’t comply with the tough, authoritarian, and ‘always-in-charge’ stereotype. They shared how their peers, men and women, around them jokingly (but seriously) have questioned their manhood because they had made choices that seem outside the norm, like being an equal partner at home or expressing their emotions more openly.

So the ideas about manhood are entrenched in physicality and power, and rape is now a way to show this. The scenario that is often seen in war zones is now present in our cities: women’s bodies have become war zones, where men assert their status in an insatiable thirst for power. The result of this perverse action is as expressed by the Brazilian teenage girl who was raped “ It does not hurt the uterus but the soul”.

Rape, like any form of violence against women, will not stop until we can break the link between power and control and what we think it means to be a man. One step is to identify the messages that day after day reinforce this damaging link and have a detrimental effect on both men and women. What does the music that we hear say about how to be a man? What are the messages about masculinity that we receive from the TV and Movies we watch? What are the characteristics of the winning character on the video games we play? What are the celebrities who appear on our screens telling us about what it means to ‘be a man’ in this time?

We cannot fight what we refuse to see, so let’s call things by their name and bring them into light so that we can fight them. Rape is wrong and there is NO JUSTIFICATION for it. Being a man should not be about power or strength or violence but about being the best human being you can possibly be and making the place you live in a better one.

Nothing can change the terrible ordeal that this teenage girl has gone through, but how we respond to it from now on will have an impact on her, on the way we all approach this subject, on the way men see themselves and women, and on the way women see themselves and see men. So let’s think twice before we Tweet, or post on Facebook, or have that conversation with a neighbour or a friend. Be courageous and engage, and stop victim blaming.

For resources on approaching sexual violence from a faith perspective visit